The journey of the goldfish started in Eastern China, possibly beginning with the Prussian carp, Carassius gibelio. 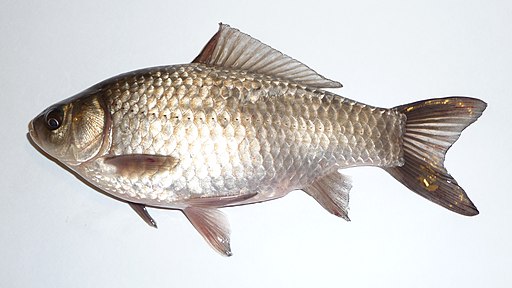 Colored goldfish date from the Jin Dynasty (265-420AD) when the fish where farmed and mutated offspring were orange and yellow colors instead of the natural brown, green or bronze.

The mutations being highly colorful were thought to be beautiful fish. They were kept outside in ornamental ponds and for special occasions displayed indoors to be admired.

Goldﬁsh only began to be kept inside from about 1400-1600. Leading to more mutations of the fish, making them a less hardy ﬁsh used to being indoors.

Keeping them indoors meant that they were more likely to be seen side-on and not from above as would be the case outdoors in a pond or watergarden.  This changed our view on what was the most desirable feature of the fish.

This change lead to the development of different popular varieties, such as telescope eyes, red caps and the calico coloration. Goldﬁsh were now popular, no longer only for Royalty and the rich.  As time went on, they became more common, reducing their value, cost and status.

In Japan, breeding programmes were set up to develop their ornamental goldﬁsh such as the Japanese ranchu, tosakin, jinlcin, nanlcin and ryukin fish.

In mid-to-late 1800’s goldﬁsh entered North America and became popular.  The ﬁrst goldﬁsh farm was set-up in Maryland, using Chinese fish strains.  The only new variety added by American breeders was the Comet.

Goldﬁsh have been a victim of their own success

Being hardy and easy to breed they became a common fish for indoors, losing their original regal exclusivity.  Being seen as a cheap pet, apparently easy to keep, bright attractive colors and shape increased its popularity and shrunk their cost.  But what was the price for this successful breeding and promotion?

Inexperienced owners had a cheap commodity that they could easily replace if it died and without a lot of empathy for their new pet fish – the common perception of goldﬁsh don’t just stem from a low replacement value. What were these fallacies – the age-old myth they have a three-second memory, only grow to the size of their tank, and of course don’t feel pain, and a major mistake for any aquarist – they thrive in untreated tap water.  We know that the water condition is a major consideration…..water hardness article here.

The Europeans and Americans started keeping them in small glass bowls – mistakenly believing that the Chinese did this, based on the Chinese custom of showing off their fish indoors in clay pots for important visitors and then returning them to their outdoor ponds after the great exhibition impressed their guests. Small glass bowls with little water and no ﬁltration lead to a build-up of waste and hormones that seriously harm health, growth and vitality. Often killing the goldfish.

The use of small traditional bowl has greatly reduced over the past 15 years.  Unfortunately, there are still businesses manufacturing undersized aquariums for keeping goldﬁsh.

It is very important to provide the right size tank for goldfish – normally at least 25 Gallons.

I don’t want to put anyone off goldfish, but there a few issues that you should at least know about.

Fancies have short compact bodies – this causes buoyancy issues.  Their internal organs are squashed into their abdominal cavity; so after feeding their gut tract swells, which then pushes against the swim bladder and it causes balance problems.

Some older fancy fish develop dorsal fin bend as they grow larger. This can be because of poor conditions and diet but it may also be that their fins are too large for their bones to support. The weight of large finnage can also cause weird bobbing clumsy movement.

Oranda and Ranchu and varieties that have large head growth (the hood or ‘wen’) can be seen toppling on their sides when searching for food, thought to be due to the weight of the growth pulling them over on their side.

In the right conditions, fancy goldﬁsh can live a long and healthy life in fish tanks.  20 years plus is certainly a possibility although 8-15 years is typical.  So what are the right conditions to ensure along life for your fish. In simple terms, a large aquarium is very important.

Considering that an Ryukin can grow to a length of 10-12 inches (30cm), as can an Oranda, these fish really need a tank of about 2 feet (60cm) in height and width (front to back) for adult ﬁsh.

Other goldfish varieties may not grow so big.  For example, Pearlscales are generally smaller, usually about 6 inches (15cm) — but they can grow longer to about 10 inches or so (25cm).

Why so big, well let’s consider how they move and remember they need to avoid rough surfaces and sharp objects to prevent collision damage.  Don’t forget you don’t want them getting stuck between the various items in your tank like ornaments, filters and any other equipment.

A basic diet of flakes and pellets, with some live or frozen feeds, plus vegetable matter like ﬂaked peas and blanched spinach is ideal for the standard goldfish – they are not really that fussy about what they eat.  However, fancy goldfish are not so easy to feed as they suffer from the short body problems and related buoyancy issues which can be exasperated by their food.

Goldfish are not grain eaters.  When selecting good quality food for your goldfish you should avoid wheat, corn, rice or soy products in the first 3 ingredients – ideally none at all.  They can’t digest complex carbs like these used as fillers.

Goldﬁsh get constipation.  Any roughage will help them digest their food better.  Crushed peas and Daphnia (live or frozen) can help the blockage. A diet rich in greenery such as dandelions, peas, blanched spinach and nettles is good. It must be easily digested.

Apart from actually choking your fish to death with gravel you might be lucky and only have a large bill for an expert removing coarse gravel from its mouth – do not use course gravel with goldfish.  Fine gravel may pass through the gills but even if it does it may cause harm to their delicate gill ﬁlaments.

Clearly they are not going to choke on large pebbles or stones, but these can create another problem in that waste can build up under them. A reverse-flow under gravel ﬁlter system can help with this.  These used to be plates on the base of the tank that had air pushing up, but this created a mess.  Nowadays the water is forced down through the plate, usually by an external canister filter which can then filter it.

Other filters you can use are ‘Hang on the back’ as a good option, having lots of media and also large sump filters are perfect, but expensive and need a lot of space.

Types of Goldfish for Pond or Tank

The Ryukin is a short deep-bodied fancy goldfish with a characteristic hump in the shoulder region.

The ryukin is a hardy and attractive variety of goldfish with a pointed head and has a pronounced hump on the back behind the head. It may be long-finned or short-finned with either a triple or quadruple tail. The dorsal fin is high while the caudal fin is often twice as long as the body.

The Pearlscale is a spherical-bodied fancy goldfish with doubled finnage similar to the fantail.  The characteristic feature of the Pearlscale is its thick, domed scales with pearl-like appearance.  Its body is round and similar to a golf ball.  The finnage may be long or short.  Pearlscales can reach up to 8 inches long and grow up as large as an orange.

Thomas McCready is the co-founder of Technology Companies that developed many fish tank products such as aquarium heaters and pumps following his passion for keeping fish.

14 thoughts on “Goldfish victims of their own success”